We got soaked after alighting the bus in Bangkok from a ten-hour drive from Siem Reap.  At the bus stop we waited until the rain stopped, we were entertained by the bus ticket in-charge. Despite the difficulty in conversing, we were given recommendations of the food we need to try in Thailand. Good thing my friend downloaded an app to aid us in some phrases. We were then accompanied by two kind-hearted middle school kids from the bus stop to our hostel, for probably about ten minutes, which was very admirable of them to assist strangers.

It was already nine thirty in the evening when we arrived in our hostel. We have already settled in our rooms and were famished. We had our last proper meal when we were still at Siem Reap. We asked the reception if there was a money exchange which is open at this hour. Sadly, they said it will open by tomorrow. But I need to eat now! My inner voice was going berserk. So we whipped our phones out, and thank heavens for Google, searched for the nearest money exchange and screen capped the direction from our hostel. We just relied on the hostel’s wifi during our entire trip by the way and trusty maps given out by the front desk.

We walked for ten to fifteen minutes until we arrived at a night market and an open money exchange. We had our dollars converted to baht and had our stomachs filled. It was weird having money but not being able to buy things. On a lighter note, we enjoyed the rest of the days we had in Thailand.

I have already tasted Thai dishes in the Philippines but it would really be a different gastronomical experience eating authentic Thai dishes in Thailand.

Our “suki” in the night market.

Because of that, I may not eat any Pad Thai when I come back to the Philippines. I have been eating Pad Thai for dinner for the entire stay in Bangkok. There was this stall owner who would always talk to us while we eat. He would give us a huge smile and “thank you” after we bid him good-bye. Won’t that keep you from coming back? Yes, given the food is already sumptuous.

We had mangoes and dragon fruit after having our dinner. The Philippines is also abundant with mangoes but the mangoes here are way sweeter. I wonder if they add some kind of syrup.

For three nights, I have been visiting this stall. Really trying to weigh if I should try some silk worms. (Well, who am I kidding? Ever since Cambodia, I was already visiting insect stall.) My friends encouraged me to try some, but I guess I needed that extra push. Like maybe joining me munch on some silk worms?

During our temple tour, we went to a certain restaurant which our driver picked-out for us. We just told him, food must be delicious and affordable. We ordered Plamook-tawt-gratiam-prick-thai (Fried squid with garlic and black pepper) for 300 THB, Tom yum Goong (Spicy Prawns with soup) for 350 TBH and Sweet and Sour fish (which I forgot to get the Thai name and price). We pair it up with steamed plain rice. Delish!

The broth of this Tom Yum Goong is really thick and full of flavor.

I also tried their pork, chicken and sausage barbecue. The pork barbecue is to die for. I would love to pair it with puso (rice wrapped in coconut leaves in the Philippines). In Thailand, they pair it up with sticky rice which I find not the best combination. Should we bring rice and a cooker next time?

From left to right: Chicken, sausage and pork barbecue

We dedicate one whole day to visit the temples. I came ready with my outfit, a cropped off shoulder coordinate, which I would just tug a little bit in order to be allowed entry to these temples.

We first went to Summer Palace and we were greeted by a large group of Thai students from different schools. I guess they were having a field trip. They looked really adorable in different colored shirts depending on the school. The entrance fee costs 20THB. 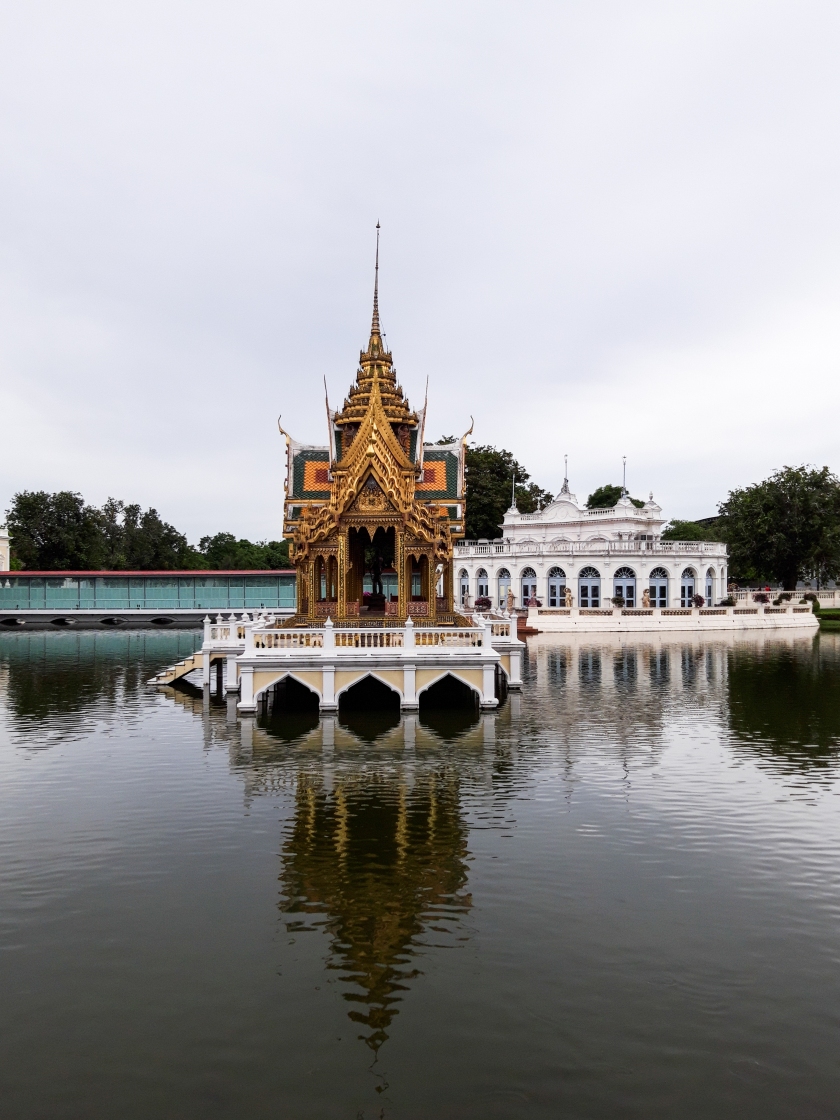 You can feed the fish at Phra Thinang Aisawan Thiphya-art while overlooking this small pavilion in the outer pond.

Magnificent reflection of the HO Withun Thasana which serves as a lookout tower .

There are a lot of attractions, like the palaces, open field, pond and animal structures made out from bushes like elephants which are spread out in a 46-acre land.

We entered the Wat Yai Chaya Mongkol for 20 THB. As we were in the gate, we can already see the towering temples and Buddha statues adorned with yellow cloth.

This huge Buddha sitting in the biggest temple.

There are a lot of people offering incense and praying. Hence, one should be careful in taking photographs since we might disturb them.

There were elephants outside the entrance gate of Wat Phra Si Sanphent. We were quite excited seeing them so close. Though we passed by a lot when we visited Cambodia.

The entrance fee cost us 50THB. From the outside, three huge temples are towering every infrastructure in the area. 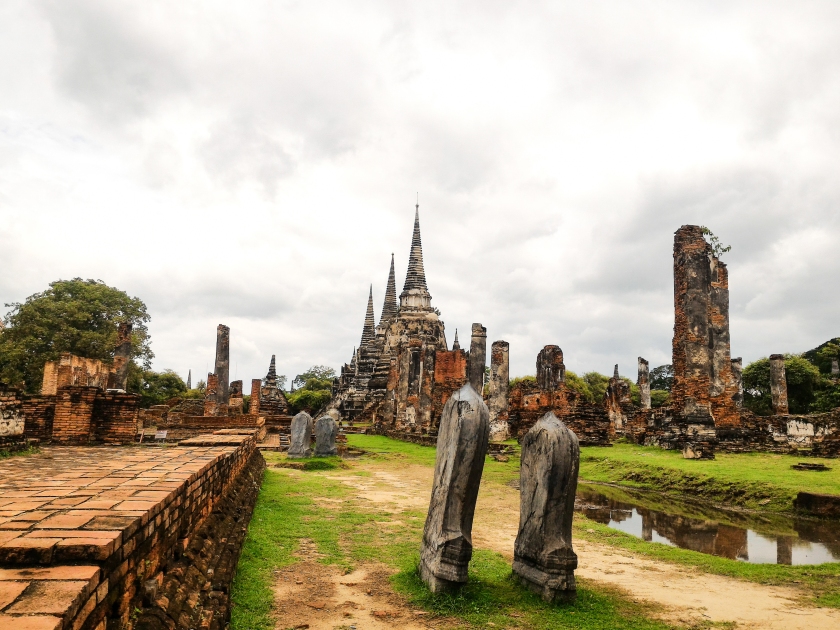 The view of Wat Phra Si Sanphet near its entrance.

It would have been great getting pictures but some portion in the temples are not allowed to be stepped on like steps.

What is the most notable in Wat Mahathat was most of the Buddha statues in the area are headless.

The center Buddha has still has its head unlike the others.

The main highlight of Wat Mahathat is this head of the Buddha statue embedded on this tree. When we took picture, the temple personn requested us not to stand over or turn our backs on the statue.

The body of the Buddha statue lies beneath this tree.

3. Burned cash on water and land

Well, somewhat. We had one whole day for shopping. We travelled from Bangkok to Damnoen Saduak Floating Market for almost three hours. We initially plan to just walk along the sidelines of the floating market but it would be difficult since some area or stalls are not connected.

I enjoyed the boat ride since the boat man seems to press on the accelerator more. Almost an amusement park ride. We passed by homes and saw lot of small temples where there are offerings and incense.

Some of the area are too difficult to pass through especially if there are too many boats.

Even though there are a lot of items to choose from I opted not buying any because we will be going to Chatuchak market later in the afternoon. Hence, I only bought ice cream.

The boat man dropped us off in this huge market where they sell coconut products, wooden stuff, sweets, delicacies.

Wondering if I should get this if I plan on making my own Som Tum Thai (Papaya salad).

We grabbed some quick-lunch in Chatuchak Weekend Market and downed it with Thai tea before heading out to buy some stuff and souvenirs.

Almost everything is found in the Chatuchak market. Since it is huge, it is important to strategize if you need to optimize your time here.

At the entrance of the Chatuchak Weekend Market this map is handed out.

Below are some tips:

During our last night in the night market, over Pad Thai and barbecue, we talked about coming back.  We had almost four days in Bangkok and there are still too many dishes to try and places to see. Siam had definitely won our hearts and palate.