In a country of coconuts as tropical as the Philippines, winter is something one would like to experience at least once in his or her lifetime. So here I am, someone whose mood is affected by the weather and someone who has always donned a jacket in an airconditioned room; about to experience the first winter of her lifetime.

Late December 2018, my friends were already talking about experiencing winter since we were always going to beaches or tropical countries (Vietnam has Sa Pa though where it snows) for a change. Eleven months later, we finally started (a month before the trip) our preparation and I was volunteered to do the itinerary and bookings for this trip.

Taiwan is the most viable option for our winter trip because it is still visa free during our period of travel. Preparing everything for the trip was a daunting task. Sure, I do get to prepare for activities at work but this is different. My misgivings are mostly because I’d be doing it for the first time, making an itinerary for travel in a foreign country.

How to get to Taiwan?

Since we only had a month for this trip, we booked our flights based on the least priced tickets we can get. We bought a ticket from Cebu-Kaohsiung for PhP3,354 and Taoyuan-Cebu for PhP7,918 thru Air Asia.

Where to stay in Taiwan?

Through Booking.com, we were able to book at Big Bear Hotel for one (1) night in Kaohsiung at NTD 1,323 for four (4) persons. In Taipei, since we wanted to be near the Main Taipei Station we were left with hostels. Pretty much all the recommended budget hotels were fully booked. Here x There Hostel offers a dormitory where we stayed for three (3) nights at NTD 5,859.

How to get to places?

You can easily get around through their train station and buses. We purchased an Easy Card for NTD 100 when we arrived at Kaohsiung International Airport. You can load the card and it can be used in all of Taiwan’s trains and buses. There are available unlimited train passes for specific districts too.

We took the Taiwan High Speed Railway from Kaohsiung to Taipei. We booked our tickets thru Klook at PhP 1,891 per person. It only took 90 minutes to arrive in Taipei instead of four hours when riding a bus.

What are the attractions to visit?

The Dome of Lights is located at the Formosa station B1. This an attraction for tourists and locals alike passing through the station to get to different parts of Kaohsiung. 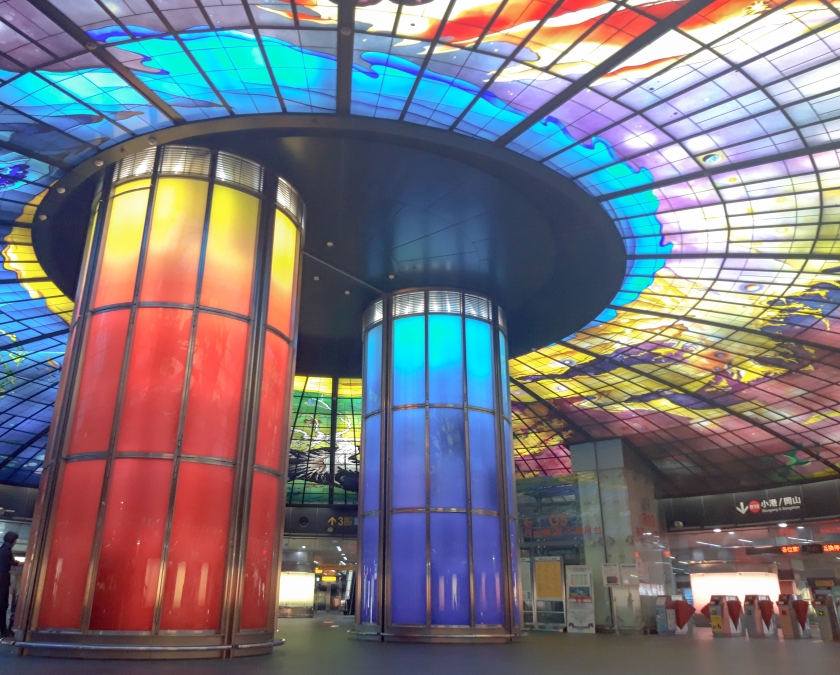 Passing through the Dome of Light is an indication that we were about to see new parts of Kaohsiung.

We arrived at the hotel around 4:00PM and since we haven’t eaten our lunch yet, we decided to have our lunch/dinner at Liuhe Night Market.

We were amazed by the size of the fruits they were selling and how pretty they are.

Liuhe Night Market has an array of food and drinks to choose from. Before deciding which food to choose, we surveyed the area and settled for noodles, dumplings and milk tea.

Supposedly Liuhe Night Market was our last stop for Day 1, as we were walking back to our hotel we met a Filipino who was already working in Kaohsiung for five years. She told us to visit Taroko Park and Love River.

Taroko Park is like a mini amusement park with lots of lighys, rides and oicture booths which kids and kids at heart will love.

From the Formosa Station, we walked to Love River for a good 30 minutes. We mostly praised the wide and empty streets and (they) loved the cool wind.

Our Day 1 ended so late that we started our Day 2 around 10 AM. We took the train to Zuoying Station and rode a bus #8501 to Fo Guang Shan.

Got this shot of the Fo Guan Shan after so many tries.

Fo Guang Shan is a memorial buddha museum. There are various attractions however we just visited the Buddha with eight pagodas along its pathway.

The bus we rode from Fo Guang Shan ended its route at Eda World. We might as well load up our Easy Card and have an early dinner.

We booked our tours through Facebook for New Taipei and Nantou County, pick up at Ximen station is around 8 and 6 AM repsectively. Since we checked in at a nearby hostel, we just walked to our pick up point. By the way, train stations open at 5:50 AM, hence it is better if pick up point is near the hotel or the van can pick you up.

For the New Taipei tour, each person would pay NTD 1000 and NTD 1500 for the Nantou County.

Before arriving at Shifen Waterfall, you need to walk over a bridge beside train tracks. Location is great for photo, however too many people would walk through this area.

The first time I saw a waterfall this wide.

Shifen Waterfall is dubbed as “Little Niagara of Taiwan” because it resembles the Niagara falls. There is a view deck where you can admire the falls or take pictures.

We came to Shifen Old Street to write wishes on a lantern. The stalls are located each side of a train track. We chose a four-colored lantern; yellow, orange, green and pink which symbolizes wealth, marriage, success and happiness. The four  colored lantern costs NTD 200.

After releasing our lantern, we were approached by a boy shouting “Train is coming”. Just as we arrived at the platform, the train passed by. That was close!

Honestly, it was quite difficult to write wishes when you haven’t really thought about it yet.

The color of the rocks gave that golden like appearance of the falls. Golden Waterfalls is just beside the road where tourists would casually park their van by the road and take pictures.

The water glistened differently because of the rocks of the Golden Waterfall.

Jiufen Old Street is full with tourists from the start to end. It was amazing how people can still purchase goods despite the flock of people trying to get through. 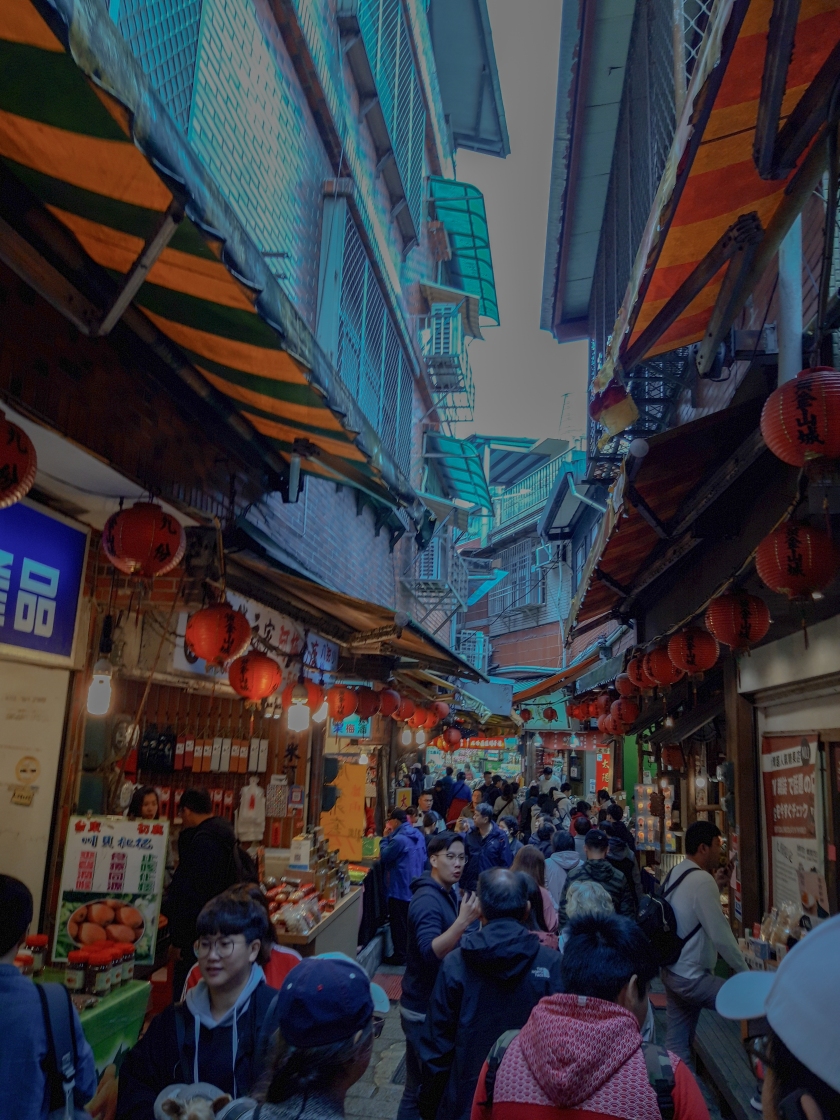 I left an umbrella at A Mei Tea House which was borrowed by our driver and I need tk get back in the van in 20 minutes. I used an alternate route instead of goig through this alley again.

This is where the famous A Mei Tea House which was featured in the cartoon movie, Spirited Away is located.

Nanya is visited by tourists because of its peculiar rock formation. It is located near the coastal highway. The area has the ocean and mountains on each side of the road which are plus points for visiting Nanya.

The famous peculiar rock at Nanya.

Yehliu Geopark is famous for the Queen’s Head. However, we did not proceed in visiting the Geopark. We decided to explore the market outside the Geopark.

It has been days since we had rice, so we did not pass up the opportunity when it was presented to us in a bowl. We also had dried fish, fresh kiwi and dragonfruit.

Outside the King’s Garden there are two life size chess boards and a train. Inside the building, there are food and souvenirs stalls. The best egg tart I have tasted can be purchased here.

It was raining at King’s Garden when we visited. It would have been nice to pose with these colorful chess pieces.

The facade is reminiscent of English movies because of the architectural design of the buildings. 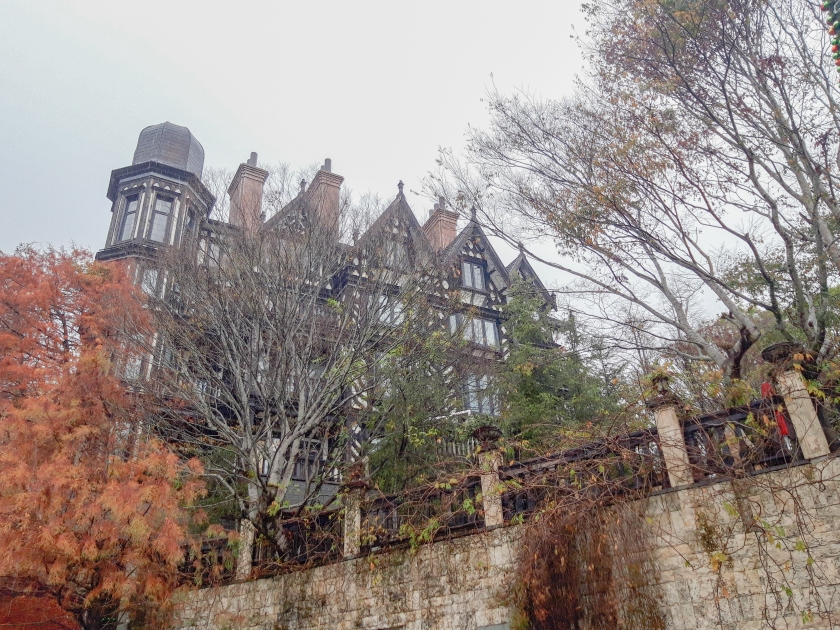 This is still Taiwan right?

The entrance fee of Qingjing Farm is NTD 160-200. You can feed the sheep if you putchase NTD 25 dried grass. It is quite ticklish if you feed them using your hands. I was giggling and screaming the entire time.

Hehuanshan or Snow Mountain would snow during January. Luckily at the time of our visit, it was a just foggy with a 4 degrees Celsius temperature.

I zipped my jacket and bravely took one picture before scurrying inside the van because it was too cold for me. I need to massage my fingers and toes on the way back to Taipei because they were all numb.

Our last day in Taiwan. We explored the nearby attractions before heading to Taoyuan Airport and made the most out of our remaining hours.

From the Taipei Main Station we rode the train and got off at Taipei 101. We paid our entrance fee through a machine and chose our entry time. The entrance fee costs NTD 600. The elevator which took use to the observatory on the 89th floor was really fast. It holds the Guiness World record from 2004 to 2015.

On top of Taipei 101. Imagine this view at night.

Despite our limited time, we decided to make time to visit Chiang Kai Shek. You haven’t been to Taiwan if you haven’t visited Chaing Kai Shek.

Chiang Kai Shek is our last stop before heading back to Cebu.

The entire winter trip was amazing and full of realizations.

1. There are helpful people all over the world. We are grateful to Janice, the Taiwanese student who accompanied us from the train station to our hotel despite having a class to attend to.

2. Technology has made ways for people of different nationalities to understand each other. We translated the questions we wanted to ask the sales lady or address for the taxi driver to take us. Great thing we purchased a simcard with an unlimited data for five days to aid us in translating.

3. Winter is great but not for me. It is nice to get to dress up with coats, gloves and hats but I was not made for the cold. One should really invest in winter clothes to enjoy the weather.

Overall my first winter trip is awesome. Despite the inconveniences bought by my inappropriate clothes during our visit to Hehuanshan. Knowing better, would make me enjoy my next winter trip if given a chance.